Lingerie Sew-Along: Binding the top of the bra, Part 4

First off, for those of you who are interested in a fascinating blog post on the 1940's style bra silhouette, check out this very well researched post on By Gum, By Golly.


We also had a good question yesterday about darts: after resizing her bra pattern to allow for a larger bust size, Xye asked: Anna! Where is the top dart supposed to lie? Mine is pointing the dart nearest the side/furthest from centre - so not central to bust point? And how far from centre back should the tapered point of the upper bra piece end? Mine is ending about 2" from centre back (I think, while squinting and half turning to look in the mirror!). Thanks!

This is a great question! Xye, your top dart is in just the right place! Good job! The back sounds about right too. On mine it is about 2 1/2" from the center back, but this will vary a bit depending on whether or not you extended the back, and how much stretch your bra band fabric has on the bias.

And now on to binding the top of the bra: 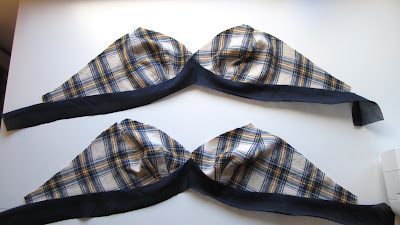 Start by matching the center front and pin a few pins to secure them together.


In order to avoid some odd corner back there, we're going to trim the bra back down just a bit to get a straight line.

Now baste the bra pieces together along the entire top of the bra, about 1/4" from the edge, stopping before you sew into the bra band. 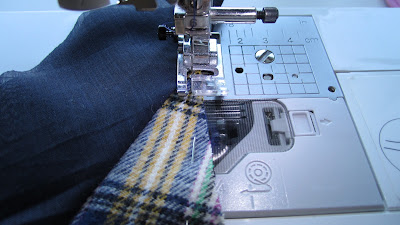 Now the bra is ready for the top to be bound with bias tape.
For beginners, I recommend that you use a bias tape that is wider rather than thinner. Here I have used double fold, at 1/4" wide when finished. It's a total nightmare for even experienced seamstresses but it's the only color I had on hand that matched my fabric. Now we have a rather obnoxious angle to achieve at the back of the bra with our binding. Some of you quilters might know a better way to do this, if you do, please share. What I did was fold over my raw edge of bias tape on one end like this: 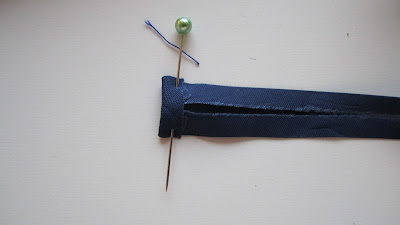 Then I folded the outer corners in at an angle. The easiest way to keep it folded that way is to just quickly baste it that way by hand. (Let's all ignore the fact that I badly need a manicure, I'll get one in the U.S. next week where it won't cost $60.)  :) 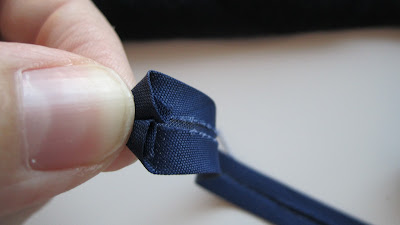 You can see my fold lines below where I started to pin it to the back of the bra. Clearly, I was way too lazy to baste it and that created problems. 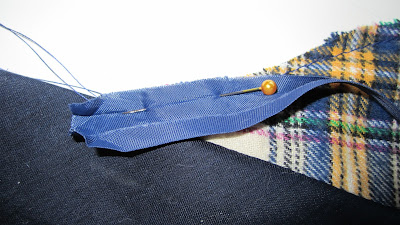 Pin your open bias tape to the inside (the lining side, now to be referred to as the wrong side). 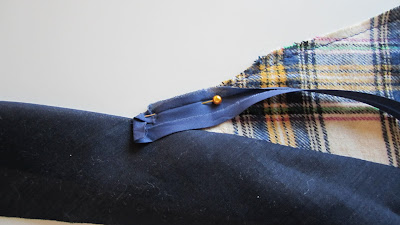 As you get to the center front, you can bend the two halves into a straight line and continue to pin the bias tape along. Stitch the bias tape as you have it pinned, the entire length of the top of the bra, stopping at the bra band.
After you have stitched the tape tot he WRONG side, fold over the bias tape on to the RIGHT side of the bra. Pin it in place and sew, very close to the inner edge as below: 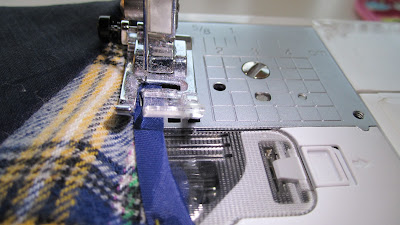 Now that the top of the bra is bound, you'll want to finish the rest of the top. Fold the ends of the bra bands RIGHT sides together. At the end, pin 1.5 cm or 1/2" for your seam allowance. 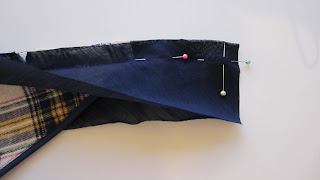 Stitch the top end of the bra band together, stopping 1.5 cm/ 1/2" from the very back edge.
Flip right sides out. 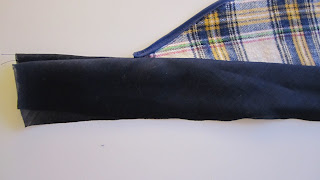 This will finish the top edge of the bra band.

Up next, sewing the facing bra bands together.