For today's installment of the Lingerie Sew-Along we'll be going over sizing issues, layout, and cutting out your bra. First I would like to address questions and comments from the last post.

One commenter asked "Could you be more precise on what to do if the bra cup is too small? Or any alterations to the bra cup whatsoever. Also: Why isn't the bra band curved like it is on all other bras?"

Thanks for your question. First I'll address the bra band question. I'll talk about sizing the bra cup in this post as well.  The bra band is cut at an angle from the fold of the fabric, giving it a natural curve shape that matches the lower curve of the bra cup. The back is a bit curved naturally but this comes from the bra band being cut on the bias and therefore having a bit of stretch. You should also keep in mind that not all bras are created equal, or in the same era for that matter. Some don't have bra bands at all, and those that do aren't always curved.

And Annabelle commented that she wanted to see one of these made up. Good idea!
Here is a picture of a lace and satin version of this bra that I made recently. 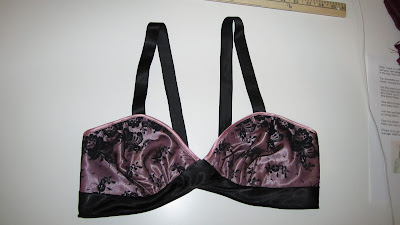 Once we have covered the basics of this pattern, I'll also be teaching you how to make variations on the original, as well as a tutorial for a lace version.

Lets get started with sizing, shall we? It's not the easiest sewing trick to make a bra cup larger, especially if it has 4 freaking darts to throw you off. This won't be an exact science either because every girl's "girls" are shaped differently. Here is the basic idea for you.

1. Tape your original bra pattern pieces together so that you have the original as shown in our last post.
Do NOT add your seam allowance to this yet.
2. Cut out the bra piece and have a large piece of paper ready.
3. You will want to cut the pattern piece as shown below: 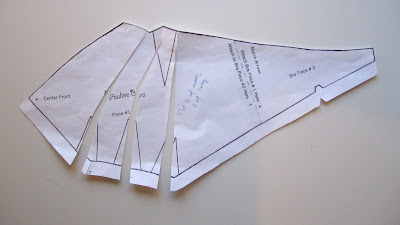 Cut through each bottom dart all the way to the top, sort of at a point. Start with adding 3/8 of an inch to each gap for the next size up, keeping the top sort of together as much as possible. Then tape this to a large piece of paper and then you can start adding your seam allowance. You'll need to retrace the darts on to the new pattern, and make sure the darts are the same size as in the original. You can space them out about 1/2" from each other. It doesn't have to be exact. 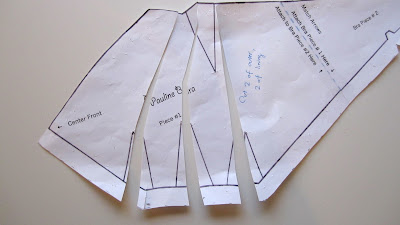 This should add room for another cup size. If your bust is say an A or B cup, you should be ok in the original pattern. If you're truly blessed in that department, then you might need to add another 1" or so to the top line of the bra, as if you were adding a seam allowance to that end.

This pattern is a 34" bust, and if you're say a 36 B, you can just add another 1" to the back of your bra band. The above is an approximation and you might have to give it a couple of adjustments to make it fit you properly.

Now on to cutting layout. For this version, I cut out 4 bra pieces from my plaid flannel and 2 bra bands from my contrast fabric. My contrast fabric is an old scrap from a vintage slip that I've had in my scraps bin for ages. Waste not, want not!

Starting with the bra band: 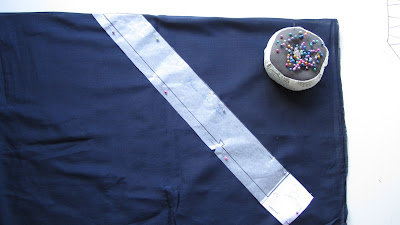 The angled end goes on a fold. As you can see, I have my "just in case" extension there on the back end of the bra band. At this angle, the band is cut on the bias and will have a bit of stretch and curve to it. 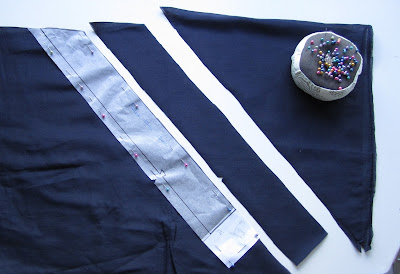 You can simply cut out a second right next to the first bra band.

Next I have my super soft, light weight flannel folded on one end. You can cut two bra pieces from your outer fabric and another two from a lining fabric or scraps. 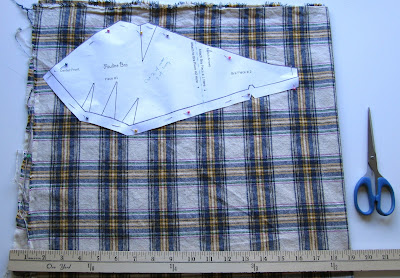 I have just cut out all four from the same fabric. When I'm done, my bra will look the same on the inside as the outside. 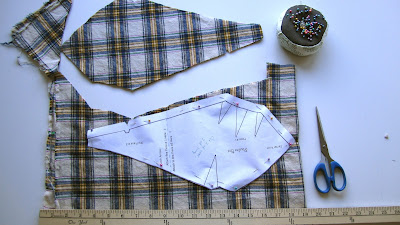 When you're done, you should have these: 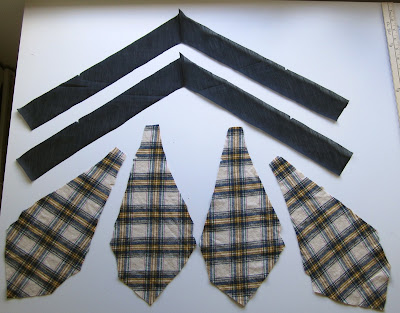 Tomorrow we'll go over darts and sewing our bra pieces together.