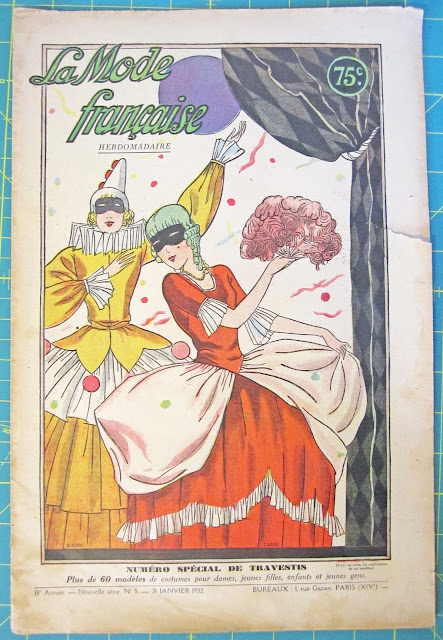 Today for your viewing pleasure I have pictures from one of the my favorite French magazines. This breathtaking, rare 16 page magazine is full of chic costume (Travestis) fashions from January, 1932. The pages contain advertisements, amazing full-page color fashion illustrations, photographs, and articles. This issue features costumes with some of the most colorful and mind-blowingly beautiful illustrations I have ever seen. Please pardon some of the photo quality - these were taken a long while back with my old, lousy camera... 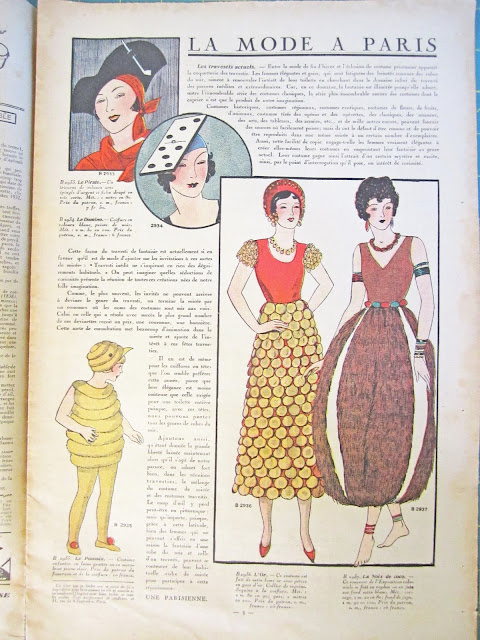 Recently, I found myself explaining to a friend why I reproduce sewing patterns for a living, and it got me thinking. Why do I really do what I do? As a pattern seller on Etsy since 2008, I've had lots of opportunity to get to know the pattern selling field in depth, both as a seller of original patterns, and a "reproductionist," as I call myself. Those who sell reproductions often find quite a bit of ire directed our way. Some of it is justified, and some of it isn't. Some of us are very careful, have researched our rights meticulously, and even have copyright lawyers. Some are less honorable, or less informed, and sometimes blatantly illegal.

As a member of two very large vintage pattern seller teams on Etsy, I became well acquainted with the reasons some people really don't like reproductions, and it can sometimes be hard to belong to a field that can sling quite a bit of undeserved frustration your way.

You would be surprised at some of the angry comments directed towards myself and others by those who only sell original sewing patterns (though, I must point out, they are not necessarily a majority in the field, but a very vocal minority.) I heard things like, "You devalue our sewing patterns by making copies," or "You're violating copyright law and stealing" and a few other arguments. And over the last 5 years or so, I've spent a lot of time explaining myself. Recently I was asked to leave the largest pattern selling team on Etsy, Pattern Patter, because a change of leadership and team policy decided that suddenly any PDF (digital reproduction) seller on the team was not allowed to compete with other team members in the marketplace. So for example, if someone from the team were to list an original sewing pattern that I was selling as a reproduction, I would be required to take my reproduction down. This was impossible due to the time and money I spend developing a pattern - money I need to recoup by selling that pattern. I tried to negotiate this point and others but the leadership, though they tried to reach a solution, couldn't and instead asked me to leave if I couldn't comply.
I don't blame them. They're doing what they can to protect their businesses from what they see as a threat to sales. That's ok. Misguided, but ok.

I feel compelled today though to explain once and for all, why I do what I do, and what I've learned doing it for as long as I have, and why some of these detractors are quite mistaken.