Anatomy of a Dress - The Unexpected Victorian Dress

Lately, I've been having fun reverse-engineering dresses into patterns. This is a technical, convoluted excuse for my "buying vintage clothing I'll never wear"  habit. I just love to study original antique pieces, how they are constructed, what materials were used, which parts have held up to wear and use, and which parts haven't.  Sometimes this manifests in a new pattern at Mrs. Depew Vintage, but most of the time, it just means hours spent becoming a (hopefully) smarter seamstress and designer.

Today, for your enjoyment, I present The Unexpected Victorian Dress. I was haunting a not-widely-used online auction site looking for patterns when I stumbled across a very blurry picture of a 1920s wedding dress covered in silk rosettes (more on that later). Just from the photo, I knew it to be adapted from the "robe de style" design; something I've been wanting to study in person for ages. The listing was vague, saying only "Dresses" and showing a much-abused 1920s dress hanging on a door. I bid furiously, knowing that if the plural turned out to be a typo and I only had this one dress to study, I'd be one happy girl. I won. A Giant box arrived weeks later at my door.

And inside was not one, not two, but three beautiful dresses for me to study. 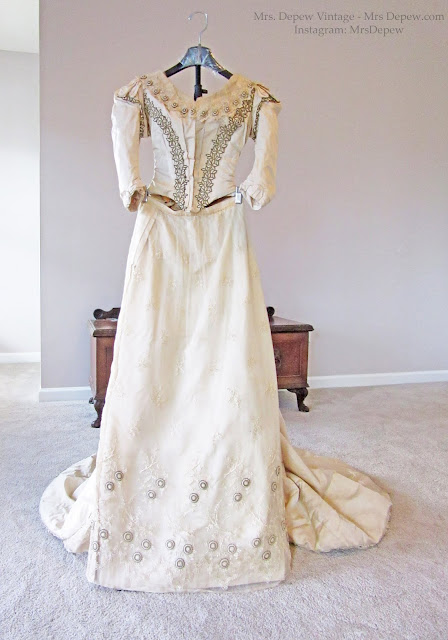 The photos that follow are as detailed as I can get, and I have erred on the side of overkill, knowing that there are fashion historians out there that will be delighted with as much detail as possible.

With their help, I am still nailing down the dressmaker named, as well as trying to name its original, stunningly petite owner and perhaps date the dress which appears to be from the late 1880s to early 1890s.
(update: this dress is now for sale!)

Today for you, my lovelies, I have a couple of gorgeous fashion pages from a May 1952 Ladies' Home Journal Magazine. The patterns advertised are by Vogue, which had a long-standing relationship with Condé Nast dating back to 1905. Sorry if the images are a bit grainy - this was the largest I could get them for you. 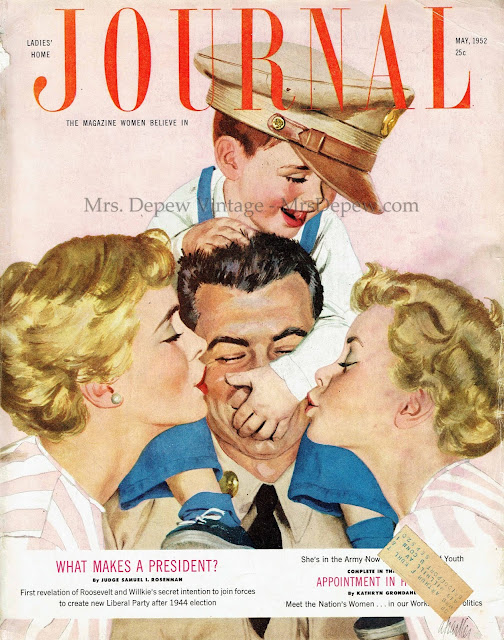 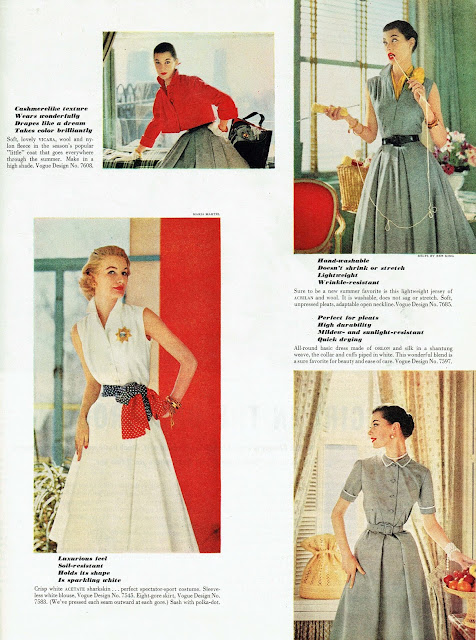 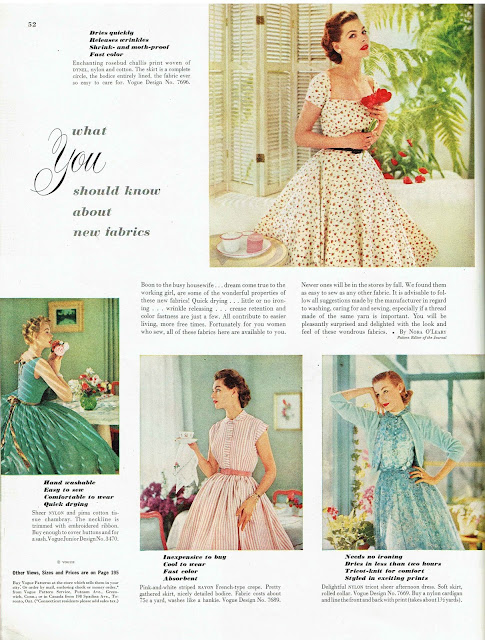 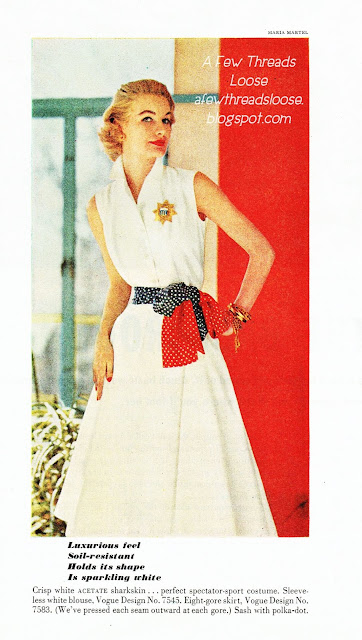 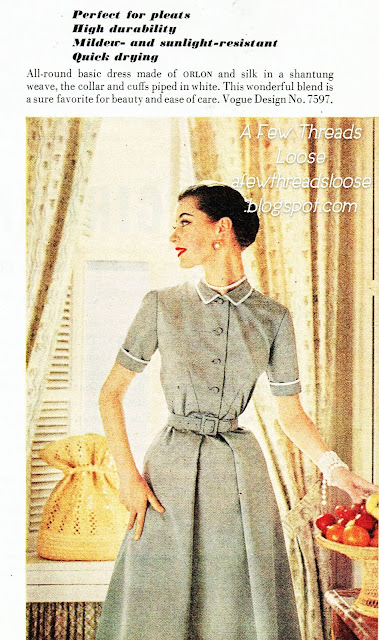 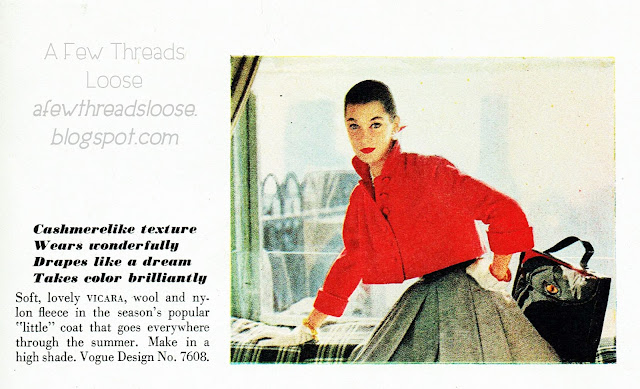 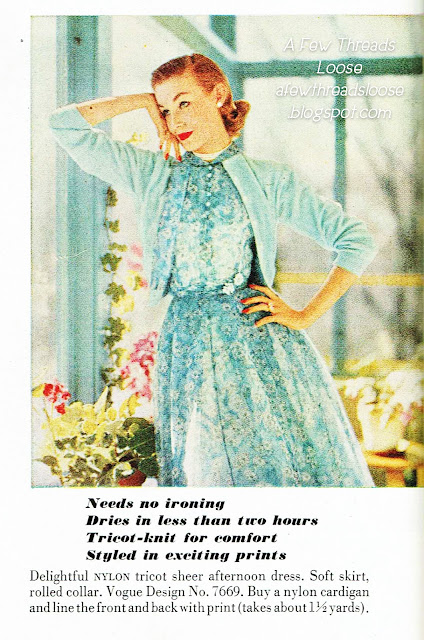 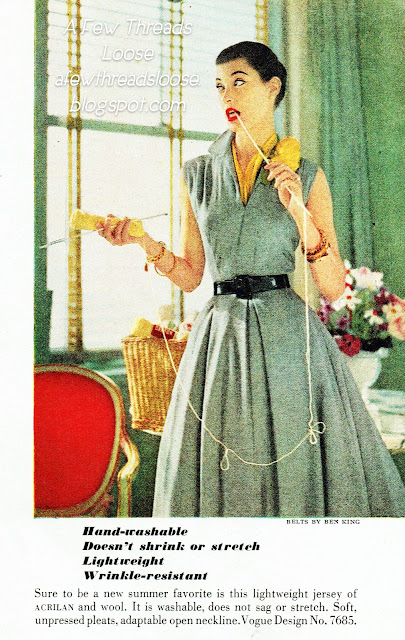 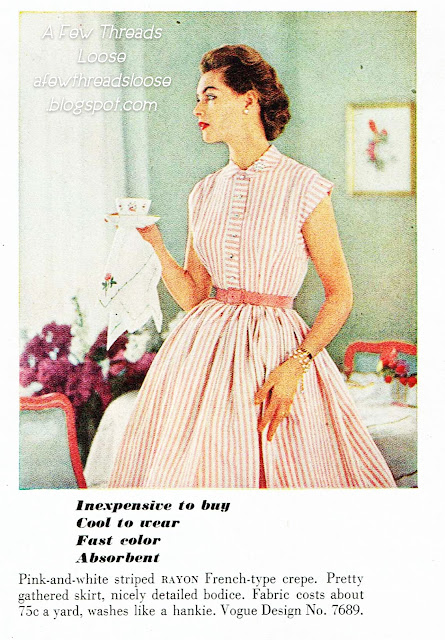 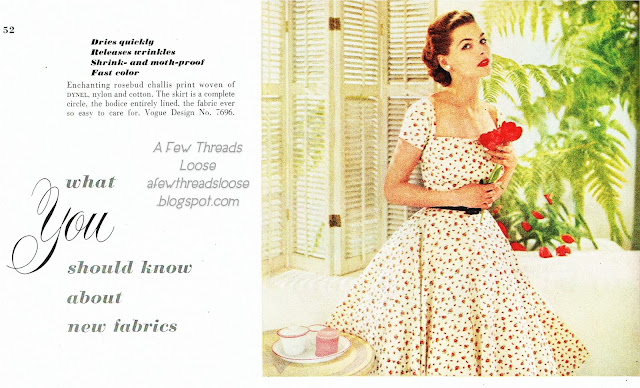 And last but certainly not least, my favorite, Vogue 7696.

And the winner is... 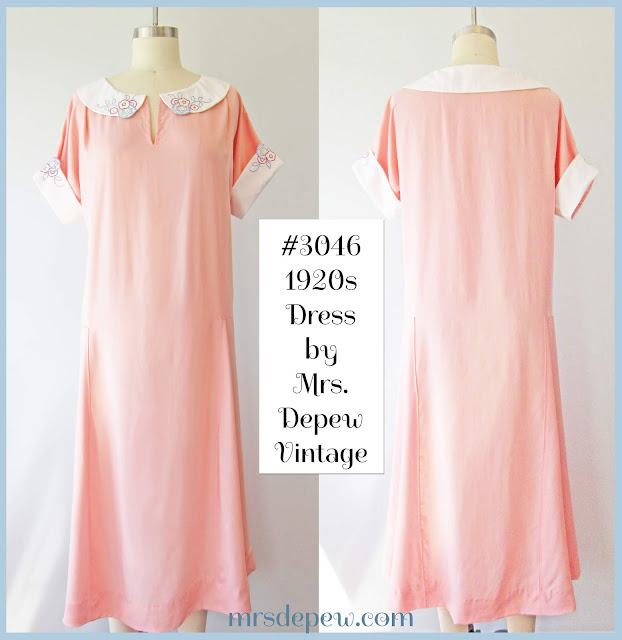 Congratulations to the lovely Kitty Ann for winning the pattern giveaway!
The prize was a copy of Depew #3046 1920s dress pattern. If you didn't win, here is a coupon code for 15% off at MrsDepew.com that will run this week and expire on April 17th.
HEYIMSTILLAWINNER
Happy sewing!

Today, my darlings, I am celebrating the fact that I have finally finished my 1920s dress with embroidered cuff and collars. This one sat unfinished for over two years as we moved to Georgia, remodeled our house, and dealt with me being seriously ill for a year. Now I'm slowly getting a bit better and working some more, and I have tackled some much-missed sewing!

The pattern I used is my favorite Depew reproduction of all time, #3046. And yes, love, this is a giveaway post!


But first, can I just show off a bit? I'm super happy with how the dress turned out! 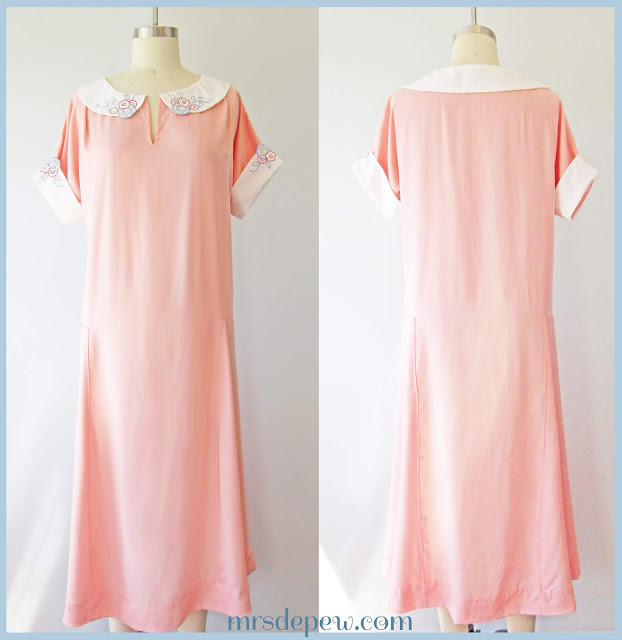 The pattern goes together really easily and the most time-consuming part is probably that gently-flared hem. I used a beautifully drapey rayon from Jo-Ann fabrics in the closest color (coral actually) I could match to the original envelope art. The rayon made pressing a perfect hem a bit tricky. 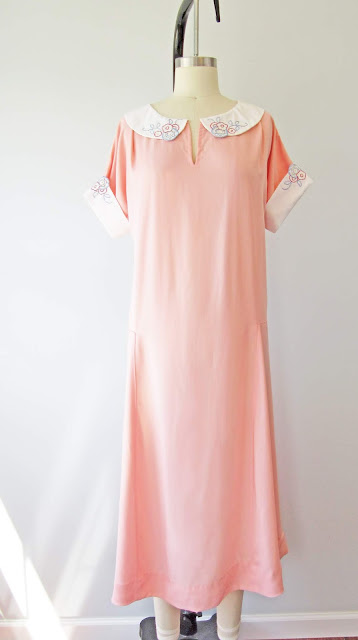 Embroidering the cuff and collars was by-far my favorite part of sewing this little gem. They are nice, crisp white cotton that I had left over from my Ikea fabric shopping days in Norway for my Picture Perfect Apron Pattern. 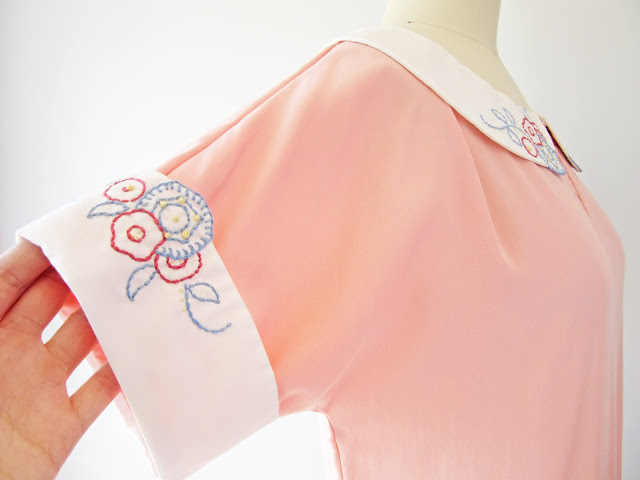 The shoulders have small tucks that are concealed underneath the collar instead of using bust darts, which weren't quite common in 1925. 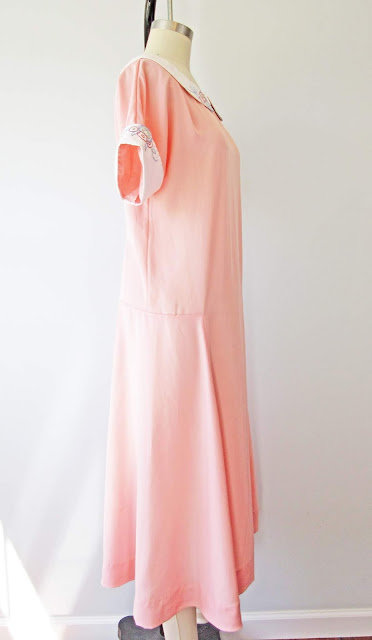 And the sleeves are so easy because they are cut-in-one with the dress body. 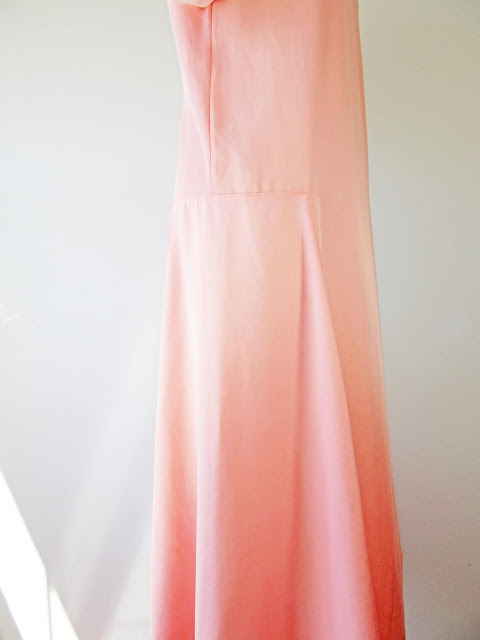 Side skirt inset panels can look tricky at first but the best way I have found, is to turn seam allowances on the panel, press, and flat fell the panel right onto the skirt. 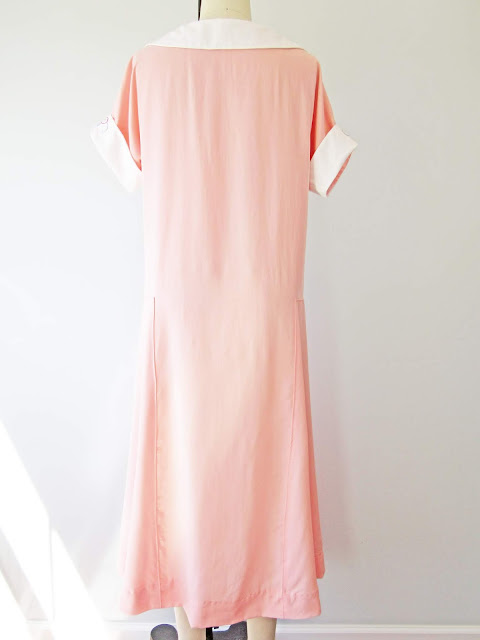 This dress is perfect for the intermediate sewist, or a good bridge from beginner to intermediate for someone who is looking to learn more and expand their skill.
Frustratingly, it no longer fits me because I lost 15 lbs when I fell ill.
(To make a long story short, I got sick, almost died, stayed sick, developed a couple of not-fun conditions as a result *friggin' yay* and am now starting to get it all under control.)

But enough about me...
How about you? Have you ever made a 1920s dress? Do you have a favorite pattern?
Would you like to win a free multisize pdf copy of this one?

For those of you that hadn't already noticed, I have a huge thing for the 1920s. 1920s aprons, in particular, are a passion of mine and I'm currently sewing my way through some of my apron pattern collection. This time I used Depew#3091 which is a repro of an original. 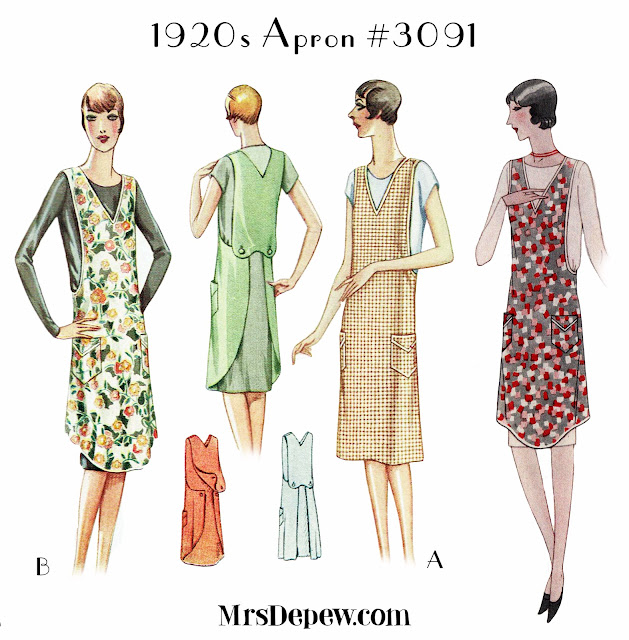 For the fabric, I picked up a pre-cut two-yard length of cotton by Waverly (a steal at Walmart of all places!) and it was the perfect amount for a propper full-coverage "canning apron" (as my mother called them).
I remember once asking her why she called them canning aprons when women certainly didn't use them only for canning. "Oh sweetie", she said, pulling a piping hot jar of garden tomatoes from a cauldron on her stove, "It's not just for canning, it's for protecting your cans!" and then she winked at me. My mama, I tell you what...

So without further ado, here is my canning apron! 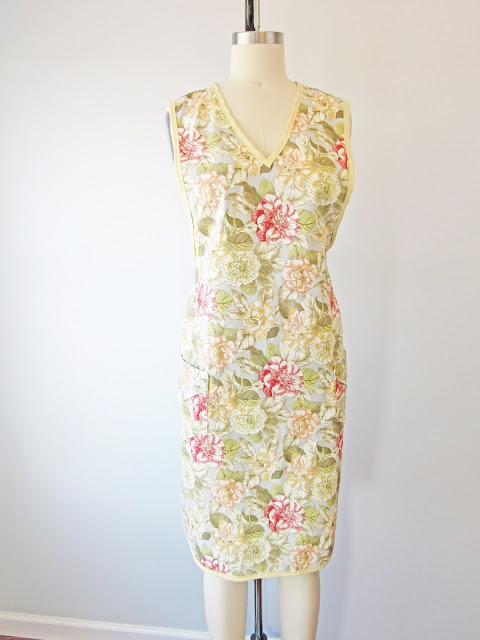 It really does provide a lot of coverage which is great for messy jobs. The buttons I used on the back are large vintage mother-of-pearls that came from my late mama's stash. 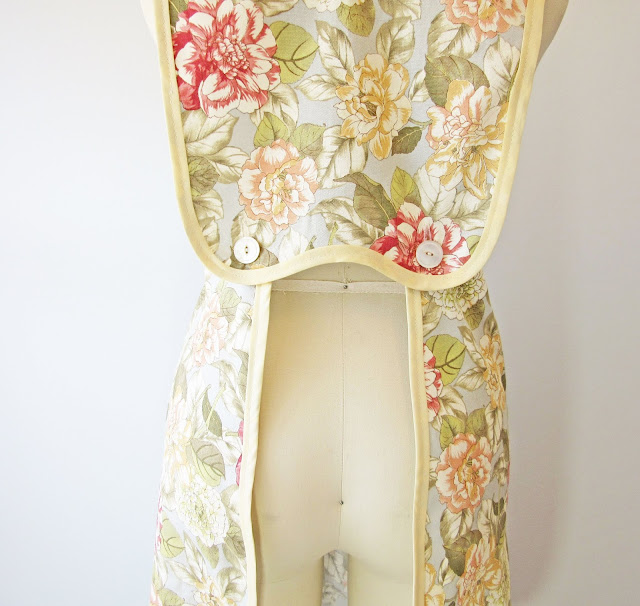 A tip if you make this one. Stitch your buttonholes in the back BEFORE you bind the edges. If you use a buttonhole foot like I do, the buttonholer will catch on the binding and you will get some really messed up buttonholes.

How about you? Have you ever sewn an apron before? Do you have a favorite apron that you just can't do without?

The Use and Abuse of The corset - A 1909 Delineator Article By Charlotte C. West, M.D.

Today my darlings, I have found for you a fascinating article about the proper and improper use of corsets. This article comes from my collection of Antique Delineator Magazines.

It was originally published in the September 1909 issue of the Delineator Magazine (as produced by Butterick) and I have transcribed the original for you to save your eyes from evil small-print. It gives an interesting medical perspective in favor of the corset from the viewpoint of a female M.D.!
(According to one source, women at this time made up about 5% of the medical workforce in the United States.)


THE USE AND ABUSE OF THE CORSET:
It May Give Strength and Support if Rightly Worn
By CHARLOTTE C. WEST, M.D.

"THROW that into the furnace when you get home," was the invariable comment of a noted medical man, as with a disdainful gesture he indicated the corset of each clinical patient who was presented to him for examination, at the same time casting a sidelong glance of disapproval at his woman assistant, who was obviously always well corseted.
The woman physician worked along silently in this clinic until an opportunity enabled her to show one of the patients that her condition-gastroptosis and en­teroptosis (prolapse or falling of the stomach and intestines)-was caused by the improper use of corsets.
"Yes," quickly remarked the professor, "throw them into the furnace when you get home, and don't wear them home!''
"But I can't 'do' without my corsets'." wailed the patient, whereupon the well-­corseted woman physician said:
"The improper use, not the use of it. You are abusing the most sensible and most hygienic garment women wear, because you don't know how to wear it.