Hello my dears. This is going to surprise you. Yet another beautiful 1930s evening gown pattern has sold on eBay for more than $12. I'll bet you never saw that coming...

I'm a bit behind on getting this pattern posted but a little while back, McCall 8476 sold at auction for a delightfully shocking $810.99. 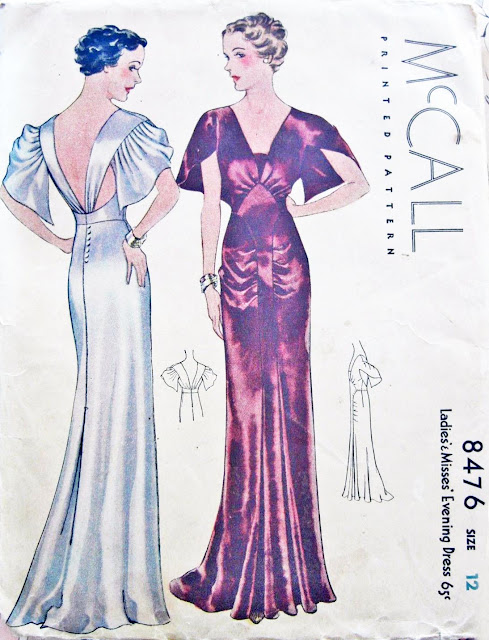 The listing photos don't show the copyright date but I estimate this one to be circa 1935.
And after a quick internet search, maybe the highest bidders knew something about this one that the rest of us didn't?


...that's right, kids, this one was designed after a Patou gown.

Now let's talk about that seam gathering at the front hips. I remember shopping for pants with my mom when I was a teenager. Something that really stuck in my head was her advice that one never wanted to draw attention to one's crotch area if it can be helped. She explained how some pants would crinkle oddly in the front area and as she'd point it out, her face would form a grimace, a crinkling around her lips as she pinched them in disapproval at a pair of pants. The expression was rather similar to the unwanted fabric puckering, now that I think of it...

And on my dear Mama's advice, I could never walk out of my house in a dress with such unfortunately positioned gathers. I have to say, Patou, darling, I'll have to pass on this one...

Now, if you'd like to see a dress that Patou absolutely nailed just a few years earlier by drawing attention to the dècolletage rather than the hips, look no further than McCall 5840, circa 1929. 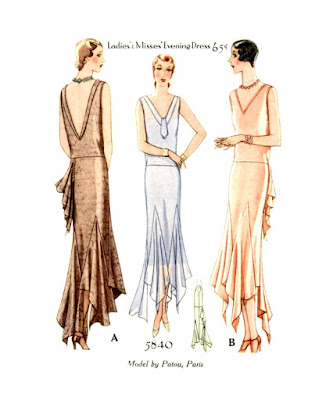 How about you? Which of these gowns is more your style?

Hello, my dears.
I've been AWOL for a while now while we've been packing up and moving across the country. We've arrived in Georgia just in time to find ourselves in the likely path of Irma (what fun!). Many of my friends, colleagues and loved ones were affected when Harvey hit Houston and I, along with my fellow Admins over at the Vintage Pattern Nerd Facebook Group decided to organize a benefit day. 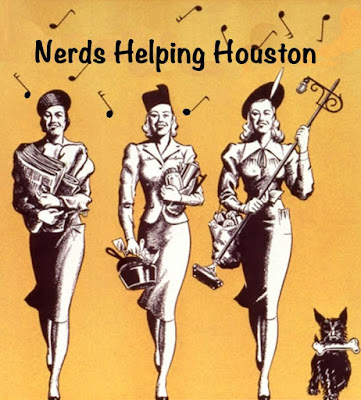 To help with relief for both Harvey and future Irma victims, I'm pledging that 100% of all profits on Saturday, September 9th sales will be donated to Hurricane Harvey & Irma Relief. This includes all Etsy, Mrsdepew.com, and Facebook sales.

Here are the details if you'd like to join in:


Here at the Vintage Pattern Nerd Group, we have built a wonderful community of helpful, knowledgeable and brilliant pattern nerds.
We would like to invite you to use those talents and this wonderful network of friends to help those in need after the devastating flooding in Houston after Hurricane Harvey.
That’s why the admins at Vintage Sewing Pattern Nerds are organizing a Houston Benefit Pattern Sales Day next week. On our sister groups, The Vintage Pattern Nerd Boutique and the Nerd Budget Boutique we are inviting pattern sellers and buyers to participate in one special day of pattern sales.
Sellers who choose to participate can donate a portion or all of their proceeds from one day of sales to the charity of their choice to help benefit the victims of this awful storm.
Sellers can link to their online shops that will pledge donations, or they can designate some or all items in their Facebook sales groups by adding the tag Nerds Helping Houston or the attached badge to their listings.
We admins will lead by example where we can with those of us who own pattern shops pledging donations as well.
The special day will be Saturday, September 9th.
We encourage you to share over your social media networks, with your friends, fellow collectors, and fellow pattern sellers to help with a wonderful day of giving grow across our online community.
How you can help:
-Pledge on your shop page, social media, or Facebook pattern listings that you will participate in the benefit day, and detail what portion of your proceeds you will donate. Please feel free to copy and share the Nerds Helping Houston Badge.
-Copy and share this post with your friends.
-Pledge to try and buy patterns on Saturday the 9th from your favorite participating sellers.
-Make a donation directly to a charity of your choosing.
Pledges:
Where to pledge: On your Facebook page, or in the pledge post in Vintage Sewing Pattern Nerds Group or Budget Nerd Boutique.
The day after the sale: we will add a special follow up post where participants can post about participation the day before and share copies, screen shots etc. of their donations. Don't worry about bragging. By saying you participated, showing that you donated, you don’t have to be bragging, you are simply setting an example and encouraging or reminding others who care that there is something, big or small, that they can do to help those in need.
A helpful guide to choosing a legitimate donation site:
http://www.npr.org/…/looking-to-help-those-affected-by-harv…