The Satin Tap Pants of Death. 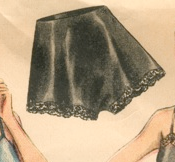 So I finally finished this horrible little cutie after hours of swearing, drinking, and even a broken needle or two. And what did I learn? Mike says they just look like a divided skirt. Poo.
They look just lovely laying on my desk, so neat and pretty, but when I put them on (yeah, like I'm going to post that on the internet) they look just like a skirt with a nice little lace flutter. 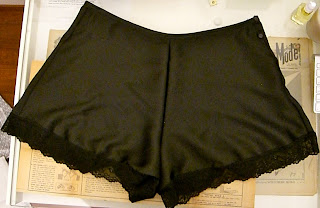 Here's where I went wrong: I decided that the 40's high-waisted pin up look would be silly on me so I adjusted the pattern to sit a bit above my hips instead. This was stupid. When I gather a handful of the waist and put it at my waist line where it was meant to be, not only is the silhouette lovely, but it makes my tushy look gorgeous. 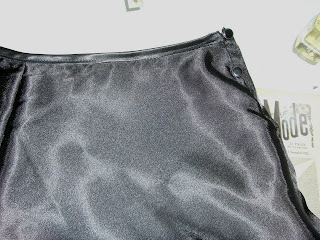 I will be using this pair as a sort of half slip under skirts as I intended, and will definitely be making a pair as the original pattern intended. In silk, rather than satin, though. The satin was a nightmare to work with. I was supposed to put a buttonhole at the waist but the double fold bias tape end was so thick that I promptly bent a needle. Instead I put one buttonhole lower down and used some satin cord to make a loop for the button above. Here's where I got tacky. I only had white satin cord, so I darkened it with magic marker. Gauche, I know, but it worked. 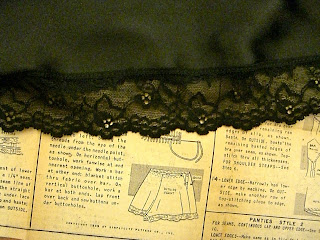 This was also my first time edging anything with lace and the pattern had a very helpful explanation of how to do that, which I have shared below. 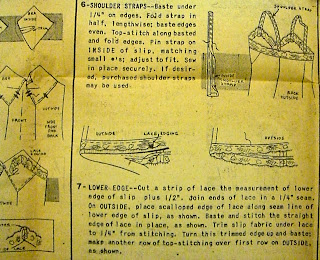 I spent an arm and a leg just for a meter of satin bias tape and 2 meters of plain stretch lace ($30!) so if anyone knows where to get some nice notions and lace online, I'd like to know. This started as a money saving endeavor and now it's just turning into a frustrating compulsion. I've spent just under $50 including the pattern and I just found something a bit similar on etsy for $25. Sigh.
Posted by Anna Depew at 10:44 PM