The hat that made my day.

A customer recently sent me a picture that made my day. She purchased my Flight Cap pattern a while back and was kind enough to send me a note about her plans for the hat, and who was going to wear it. She promised a picture in the near future and today, I received it.

A little background on the hat: This is one of my very favorite patterns. I made it by studying my husband's Air Force flight cap and referencing it with a pattern from WWII provided, oddly enough, by 4H in a vintage magazine.

My gorgeous husband was kind enough to model the cap for me, all the while giving me a lengthy lecture about the history of the hat, also known as a garrison cap, and lessons on how to wear it at just the right angle to be within "regs." ( I swear he's the reason the pattern sells. This picture positively makes me drool.) He then took pictures of me and I got lessons in making the perfect salute. A skill which I might ad, comes in very handy when mockingly used while acquiescing to the silly bossy orders of a certain military husband.
But back to the original story, the flight cap was sewn up and is to be used in the costumes of three very lovely "Andrew's Sisters" performers at a retirement village production. 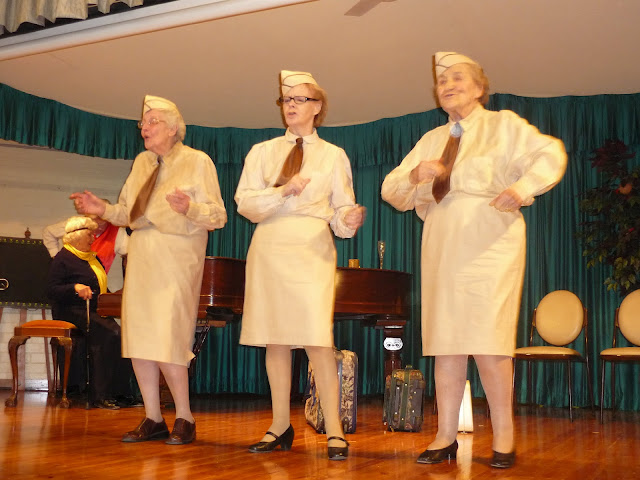 I think they got the look spot on and I would give my left arm to see this performance!