This poor slip has been waiting half done on my dress form for a couple months now. My mom included it in her last sewing loot care package so that I could make a pattern from it. We both considered it too far gone for anything else. 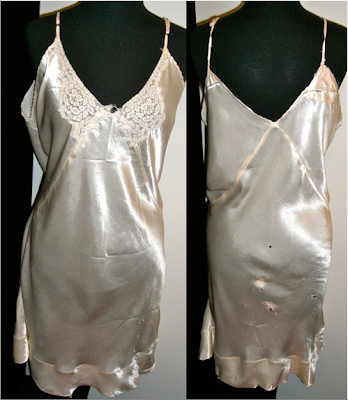 Until an idea just came out of nowhere. I was looking it over and became aware of just how many times this little slip had been patched and mended. Someone had carefully extended the life of the slip long after most people would have tossed it out. Mom lives in rural Nebraska and finds lots of treasures at farm auctions and thrift shops... I have this picture in my mind of a young farmer's wife saving up to buy a lovely cream satin fabric, sewing the slip from the latest mail order pattern, proudly wearing it, and carefully mending it to make it last several years. 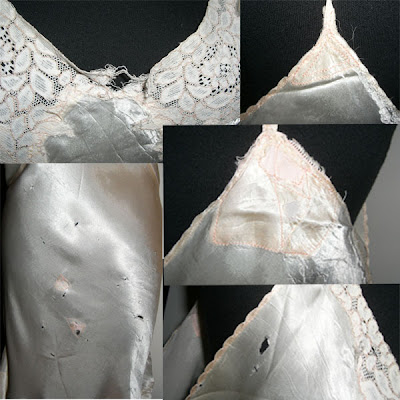 So I posed myself a question, "How far gone does something have to be before it's not worth saving?" And thus, the slip that just won't die was born.
The points where the straps joined at both front and back were all mended with great triangle patches, some times more than once. There were little patches in the front and back at about hip level that had been mended with little art nouveau rose-shaped patches. 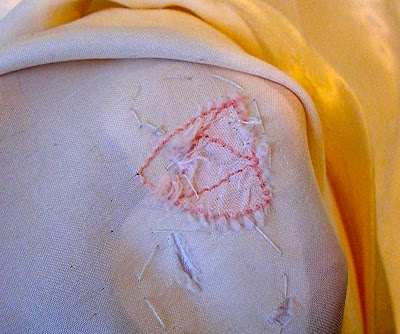 I started with  covering all the patched bits with patches of my own. I made them by cutting out little rose shapes bits of lace, backing them with  light pink taffeta, and tacking them over the old patches and the bigger holes.

That's when I got stuck and started hating It. So I put it away for several weeks. It was sitting there on the dress form mocking me every day. Then for the 4th or 5th time a friend or family member asked me, "What's that on the dress form behind you?" while chatting on the web cam. That made me feel like a slacker... so I got back to it.
My mother, being the brilliant seamstress that she is, suggested that I take a look at the vintage slip pattern she had just listed on etsy and copy it to fix the mess that the top was. So I cut open the two seams at the bust and inserted lace panels that extend from the front to the back and side seam. 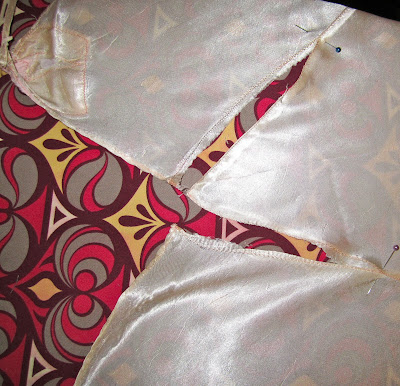 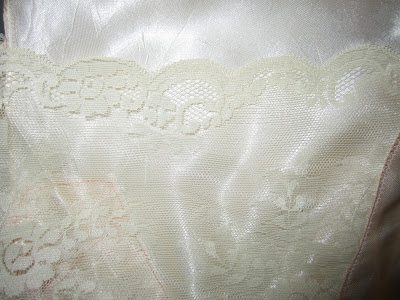 This sounds like it would be easy, but while I was picking open those perfectly top stitched seams I was thinking, "Who was this woman? Her tiny, tiny, tiny hand stitching makes me think she was a machine. Not a sewing machine. No, an evil robot sent back in time to the 1930s in a complex plot to make me go blind in 2011. Yes, that's it, an evil Robot." I worked through the swimming vision and headache and then moved on to replacing the straps with some vintage ribbon, which I extended back down to cover and bind the lace that was shredding at the back. 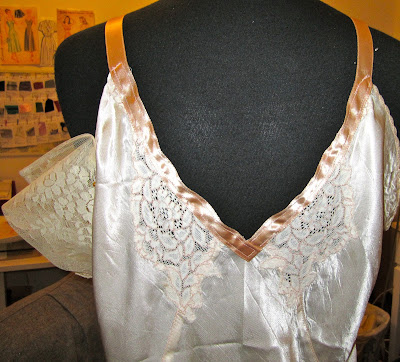 And finally after all the trimming, mending, and mad, angry hemming of the shredded and crooked hem (bias cut makes the hem a pain in the neck) it was finished. And then I went and F***ed it all up by ironing the hem, not paying attention to my heat setting, and melting a good 4" patch of my hem. I had a glass of wine and then tipsily improvised a rosette out of the leftover fabric scraps from the hem to cover my stupidity and voila! It's DONE.
DONE, I say.