Recently I was translating the description of one of my lovely vintage 'draft at home' patterns when I cam across a very unfamiliar word.
Galalithe. The pattern called for the revers and cuffs of the dress to be trimmed with "Boutons en galalithe".
Huh?

It wasn't in my 30 lb. French dictionary so I googled at and low and behold, what did I find?
Buttons galore!


Galalith was created in 1889 when French chemist J.C. Trillat discovered the means to make casein (found in milk) insoluble by immersing it in formaldehyde. It was named Galithe (in the French)  from the Greek words for milk and stone. 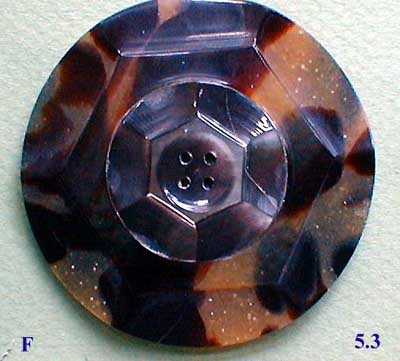 It was very inexpensive to produce and soon became very popular in the fashion industry. It was produced into buttons, combs, buckles and fake jewels. It reached it's height of popularity in the 1930's and was even used to manufacture decorative handles for umbrellas.

With the end of World War 2 came better and less expensive plastic production techniques and Galalith was relegated to the past along with its sister compounds Bakelite and Celluloid.

For those button collectors out there, according to an Ebay guide, it is said that Galalith (or French Bakelite) has a "wet wool" smell when it is run under hot water.

For those of you who want to know about the dress (I always ask, "But what about the dress?" ) the pattern is now available for download and looks like this!