My shoulder injury has been keeping me from sewing more than a few minutes a day so this project has gone excruciatingly slow but I've finally finished. 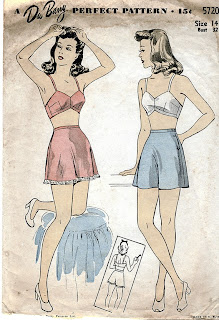 So a week's worth of detailed work and what is the result? Granny boobs. I mean full coverage, sew it when I'm 25 and wear it when I'm 80, might as well be a t-shirt bra. 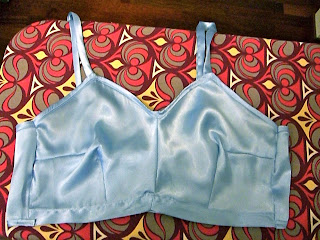 Still though, it looks ok paired with the tap pants which came out great. 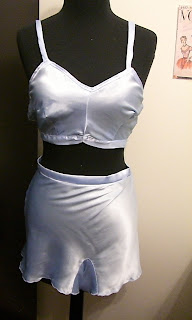 I know, it looks odd on the dress form, and great on me, but let's face it, I'm a respectable (hee hee) married woman and I can't just go posing pictures of the good china online. The pattern had a really strange crotch piece that I had to sew on and remove 4 (yes, 4) times before I got it right. 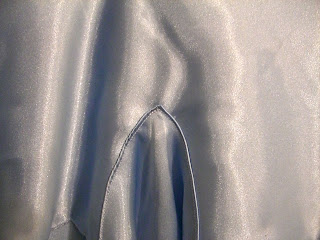 I also finished the edges of the tap pants with a scalloped stitch. 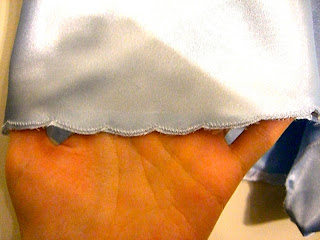 Usually you should spray on starch and press the fabric to make it stiff enough for the stitch to look better. The Air Force has newer uniforms now made out of a fabric that doesn't wrinkle, so oddly, we have no starch in the house. (Not that I ever did much of the ironing.)

So I used some rayon bias tape on the inside edge which gave it better stability. 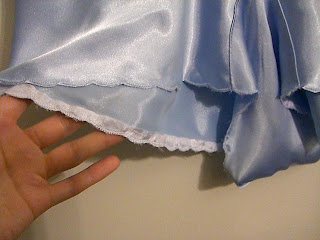 I think I'm going to end up experimenting on the bra and maybe trimming down the bust line a bit but I'm really happy with how the tap pants came out.
on another note, I have my computer in my studio and I like to listen to music and watch TV and movies online while I sew.
So my sewing distractions were provided by:
"Depeche Mode- Playing the Angle" Album
Bones- Season 4
Grown-Ups : Really stupid movie with anti-climactic punch lines (come on, Adam Sandler) and fart jokes.
Posted by Anna Depew at 8:08 PM