My dears, this lovely pattern was expensive, naturally. 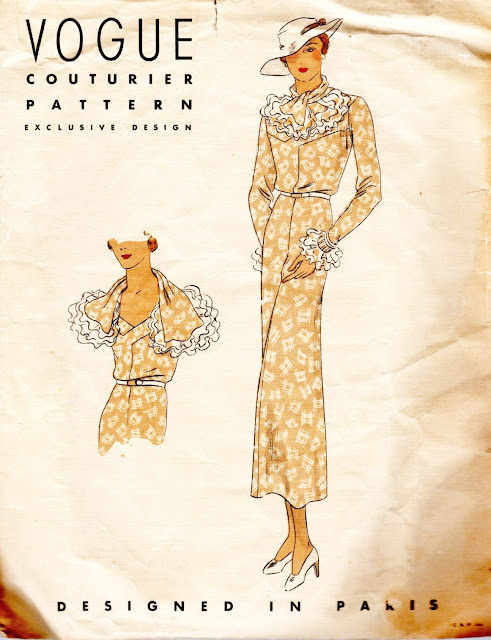 As we've discussed before, there are a lot of reasons that a pattern can go this high or higher, and the value of this one was a combination of two things.
Vogue Couturier patterns are always going to be more valuable than plain old Vogue, owing to their association with actual couture designers (though the designer isn't mentioned in couturier patterns from the 30's like they are in those from the 60's.)
This pattern is from the 1930's and I can count on one hand the number of Vogue Couturier from this decade I've seen for sale in the last year. The highest that I can remember went for just under $400.

Now, unusually for our Sew Expensive posts, I just happen to know the lucky winner of this auction. No, its not me. This particular collector who will remain anonymous is my Pattern Friend. My Pattern Friend and I met a long time back over a Facebook discussion of another rare pattern. We got to talking and realized that we had very similar collecting tastes. We talk patterns quite often and this one came up in conversation.
When I asked her if she cared to comment on why this pattern had such a draw to her, she simply replied "Even a sundress is stylish."

This made me giggle a little because, really, each collector's pattern taste is so unique. Sure there are the sought after, universally acknowledged "high value" patterns, and then there are others that quite honestly have a "Je ne sais quoi" to each individual. Something in it speaks to us, makes us fall a little in love, and perhaps do foolish things to acquire the object of our desire.

Here are a few other Vogue Couturier from the 1930's for your enjoyment....

How about you, my dears? Do you have any Vogue Couturier patterns in your collection? Have you learned anything interesting about them that you'd like to share with the class? I have just one of these. One... and one will have to be enough. They go too high at auction for me to allow myself to fall in love. Anything more than a brief affair for me and it will all end in tears...
Posted by Anna Depew at 9:06 PM