Vintage bra patterns and what they're worth.

If you've been following A Few Threads Loose for a while you might have noticed that I'm just a little bit obsessed with lingerie. Just a little bit. Though I certainly have enough lingerie patterns in my personal collection (just ask my husband, he'll tell you) I'm always hunting for a new pattern to add to the vast number of little tissue paper beauties carefully stashed away in my studio.

Recently I had my eye on Vogue 6075. I decided at the last minute not to bid too high because I had one nearly identical to it, and because business with Mrs. Depew Vintage had been kind of slow (nice weather sort of keeps people away from their sewing machines, or so I've heard. I wouldn't know; I live in Norway).

Anyways, last night I watched this sweet little pattern sell for $31.95 on Ebay. Believe it or not, this is actually a little on the low side. It got me thinking as I tried to fall asleep last night with visions of sugar plums and bras dancing about in my head. What are vintage bra patterns worth? Do they have a definable value, or are they, like so many hard to find vintage patterns, worth only what us mad collectors are willing to pay for them? Take, for instance, McCall 7201. This pattern is a very nice example of a vintage lingerie pattern because the illustrations are lovely, it's from the 1940's (a well sought era for patterns) and the pattern features not only a bra and tap pants, but a petticoat as well.

This particular pattern is being offered at two different locales online as we speak. VtgSewingPatterns on Etsy (a well-respected seller who really knows her patterns) has this pattern for $45.
On the other hand, So Vintage Patterns has this little gem for $65. And I can tell you from personal experience that both of these prices are very fair.

This is an average for a 1940's lingerie pattern unless it's truly remarkable or hard to find.

Let's try the 1930's. Pattern values go up quite a bit in that one decade age gap.
(On a side note, in my research for this post I just bought another lingerie pattern. I'm weak. I need help!) 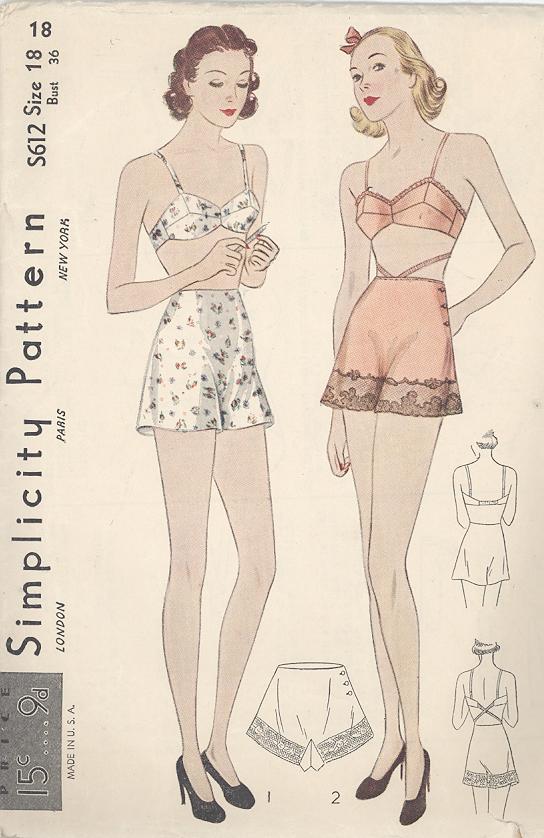 This pattern is part of the fabled Simplicity S-Series (gotta catch 'em all!) from the mid to late 1930's that I've been collecting for the last few years. I have never seen this pattern for sale but I can tell you that it would sell for around $75 to $150 on Sovintagepatterns.com whose prices range at the higher end of the spectrum. I can also tell you that I would pay $150 for this pattern and not flinch (too much). I want it that bad, and therefore, it's worth that much.

Let's move back a few more years to the early 1930's and take a look at McCall 26 from 1932. Keep in mind that to the collector, the more lovely the pattern illustration, the more valuable the pattern will be in their eyes.

This truly beautiful pattern is being offered by Anne8865 on Etsy for $48.
(Dammit, I just looked in her shop and bought another pattern. I need to wrap this post up before I empty my bank account!)
Ahem, this pattern is in what I like to call well used-and-abused condition (poor thing), is slightly water-damaged and missing the pattern transfer. And $48 for this pattern is completely reasonable. Look at how beautiful the envelope art is! Look at the charming silhouette of the tap pants and slip! The bra was not originally included in the pattern (I know we were talking about bras here, sorry) and still this pattern is a total find! I once watched this same pattern, complete and in excellent condition sell for about $75 on Ebay. I nearly bought it myself.

It reminds me of another McCall pattern from this same theme, McCall 1848, a beautiful bra and tap pants pattern from 1930. 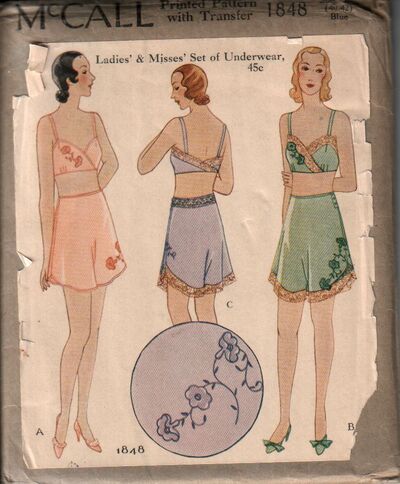 This one isn't for sale anywhere that I know of, but it would be worth an easy $100.

Now let's step back a little bit more. What are some bra pattern from the 1920's and what might they be worth? Hmmm... good luck finding one! When they do come up, the are snapped up almost immediately, regardless of what they cost. Why? Because they're all so darn pretty.
Allow me (or I should say some genius from the 1920's) to illustrate:

I stopped bidding at around $50 on McCall 25 last year. I don't remember exactly how much it sold for, but I think it was just under $100.

I could go on and on, if I could find more patterns. Sadly enough, when you go farther back than the 1920's, bra and panty patterns are rarer (because they weren't the popular mode of underthings yet) and also the patterns themselves weren't' that attractive looking.

How about you? Do you have any goodies in your collection? Have you paid a fortune for them, or gotten them from Mom (mine has given me some really gems over the last few years) or did you find them for a steal?